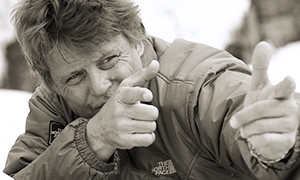 Don Michael Paul's work has taken him far and wide. From the Brandenburg Gate of Berlin to the basilicas of Budapest. From the Black Sea of Bulgaria to the high-veld of South Africa. From the shores of Vancouver BC to the Blue Mosque of Istanbul. From the Greek Isle of Santorini to the dense jungles of Krabi, Thailand. Don loves the world stage and feels at home wherever his filmmaking adventures take him.

Most known for tackling large-scale films on modest budgets, DMP cut his teeth on five different continents and he’s still angling to make his way to Oceania and the Antarctic before the sun sets on his career. He loves working with edgy, character-based action, which inspired him to write his freshman script, "Harley Davidson & The Marlboro Man," on a legal pad. It sold. Mickey Rourke and Don Johnson signed on, and it got filmed. And DMP left his legal pad behind when Alan Ladd, Jr. contracted him to a four-picture deal with MGM. This yielded more rough-and-tumble fare, including the John Dillinger biopic "Public Enemies" and the adaptation of the award-winning depression-era novel by Davis Grubb, "Night Of The Hunter."