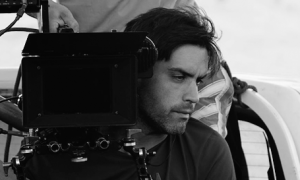 and member of the Bulgarian Association of Cinematographers. Krum Rodriguez is born in Sofia. Studied photography at the French Academy of Image in Bogota(Colombia) and later cinematography at the National Academy of Film and Theatre Arts (NATFA) in Sofia. Started to work professonaly in commercials in 2002 as camera assistant and focus puller and then in 2004 got his first assignment as a DOP. Since then he has shot 10 feature films and hundreds of tv spots for some international and local clients.