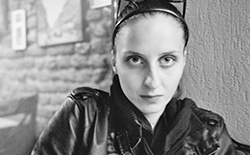 Neda Morfova - commercial director - graduated in Film Directing from The Edinburgh College of Art. Her most recent film, "Morning" has been presented at numerous festivals and won the Jameson Short Film award at the 16th Sofia International Film Festival. As a commercial director, she has worked for some of the largest clients in the Balkans:  Cosmote, Telenor, Danon, Kraft Foods, Nestle', in addition to many others. Her spot, "Thank You", for Globul won a Golden Effie and a Silver Ogilvy David’s Award for best TVC in East Europe.